The album, which was released on April 10 via Provogue/J&R Adventures, honors guitar great Danny Gatton, one of Bonamassa’s most influential mentors, and features instrumental versions of some of his favorites from Gatton, Frank Sinatra, Tony Joe White, King Curtis and more.

Jorgenson’s signature sound can be heard throughout Easy To Buy, Hard To Sell, including gypsy-jazz acoustic guitar on “Move” and “It Was a Very Good Year,” and, as Bonamassa describes it, the “epic Jorgenson [electric guitar] solo,” on “Her Majesty’s Secret Service.” Jorgenson also put his expertise as a multi-instrumentalist to work playing the tenor sax parts and a sax solo on “Fun House.” 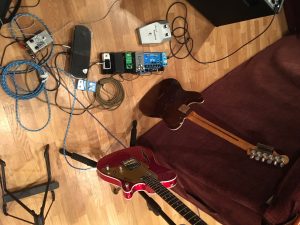 A three-time winner of the Academy of Country Music’s Guitar Player of the Year Award and recently named one of the 100 best, most influential and iconic guitar players of all time by Guitarist magazine, Jorgenson is known for his exquisite guitar licks and world-class musicianship, having collaborated with the likes of Elton John, Sting, Luciano Pavarotti, Billy Joel, Bonnie Raitt, and Bob Dylan. Along with Bonamassa and Jorgenson, The Sleep Eazys are comprised of an all-star lineup that includes former member of Paul Schaefer’s CBS Orchestra (The Late Show with David Letterman) Anton Fig (percussion), Musician’s Hall-of-Famer Michael Rhodes (bass), Rock & Roll Hall of Famer Reese Wynans (keyboards), Lee Thornburg (trumpet), and Paulie Cerra (saxophone), along with Jade MacRae and Juanita Tippins on background vocals. Also along for the ride is Jimmy Hall on harmonica.

“Knowing Joe for nearly 15 years as a friend as well as a highly respected colleague, I was really stoked that he would invite me to participate in his first instrumental album not just as a guest for one track, but as a collaborator on much of the album,” said Jorgenson. “It was a pleasure to be in the studio alongside Joe and his incredible touring band, and I’m so happy the album is now available to share!”

For a more in-depth exploration into the deep respect and friendship shared by Bonamassa and Jorgenson, check out “Episode Three” of Jorgenson’s monthly web-series for American Music Supply, The Guitarist, as the two legends sit down to discuss music history, influences, performance, gear, and all things guitar: